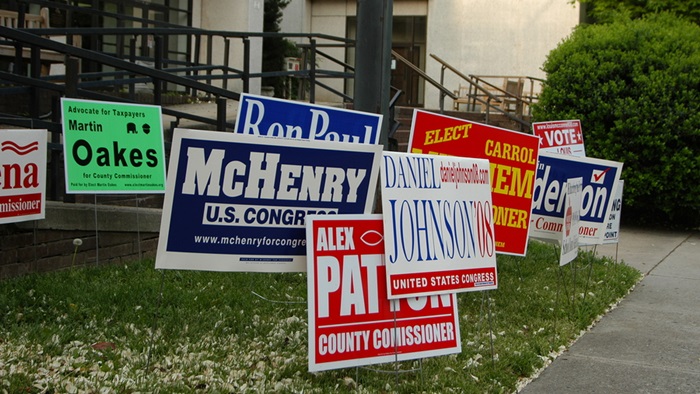 Love them or hate them, political signs are a very visible part of election season. Here in the Triangle area, candidates for positions like Raleigh city council member, Wake County commissioner, North Carolina senator or even United States congressman regularly cover the region’s yards and medians with their names.

While your conscious mind probably just sees them as an eyesore, subconsciously some of these signs have more of an effect on you than others. Here is a brief guide on how to make an effective political sign if you ever decide to run for office or manage someone’s campaign who is.

As with many things, knowing why you are taking action is the key to doing it successfully. With political yard signs, the reason is simple – name ID. People likely have no idea who you are, and you want to change that.

You may be thinking that having people recognize your name won’t make them vote for you, but that’s not the case. Have you ever noticed signs that just say “Coca-Cola” or “Budweiser” without any evident message? It’s the same tactic. Making people familiar with your name makes them more comfortable with you and more likely to pull the lever for you.

How to accomplish that purpose

So, if the goal is to raise your name ID among people in the district you’re running in, your goal should be for the sign to present your name as clearly as possible. Usually, this means making the candidate’s last name take up a large portion of the sign, but some candidates, like Jeb (Bush) or Bernie (Sanders), may use another part of their name if that’s what they identify with.

In creating a sign that impresses your name on someone passing by, there are a few important dos and don’ts.

We have been making political signs for local Raleigh Durham area candidates for years. In that time we’ve seen what works and what doesn’t. For example, using corrugated plastic is a good way to add extra life to your political signs since they will last longer in wind and rain. Jack Rabbit Signs can also design the signs for you if you want our professional graphics team to make you an effective political sign that will grab voters’ attention. Give us a call, and we will discuss what may work best for your campaign.